Hello my jolly readers – I hope all your planning for this Christmas month is all coming together (and even if you don’t celebrate Christmas, I hope that you are having a wonderful time).

This third film in our Christmas countdown is again, another one which doesn’t have that much Christmas in it – it’s there, don’t get me wrong, so it’s definitely one that cannot be missed. Particularly, as this was the year that the series became a trilogy. . .

Can’t guess what it is? Then look no further, as our third Christmas film for our Christmas countdown is. . . 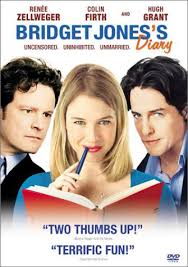 About: A British woman is determined to improve herself while she looks for love in a year in which she keeps a personal diary.

Review: Well what can I say that hasn’t already been said about this film?

I mean I love it.

And if you’re still trying to figure out why on earth I put this film into a Christmas film countdown it will soon become clear to you. If you’ve not watched the film then I forgive you, but surely it’s obvious if you have?

I’ll give you a clue – how does Bridget meet Mark Darcy?

Now please don’t try to get clever with me because I know they knew each other before, but when they meet ‘properly’ he is wearing a *ahem* lovely Christmas jumper because it’s a Christmas related event.

What’s more is that there are even some Christmas decorations that can be seen floating about throughout the film. Now Christmas would not be complete without a bit of Bridget, every woman (and man if you like) can easily relate to her in some way or another. She makes you feel good about yourself – she teaches us how to accept ourselves (if you really want to give the film a more deep and meaningful meaning). It is so worth a watch (and if you have any spare time, you must read the books).

This is another feel good film and I think that as we draw near to Christmas, these films are definitely needed.

Maybe you’re alone at Christmas and just need that extra cheering up, maybe you’ve with someone and you would just like a film to curl up to together — this is the film for you. No questions needed.