We are now in single digits until Christmas because yes only 9 MORE DAYS! That’s basically a week in my mind, which brings it so much more closer.

I cannot wait to pack up and go home – first I got to finish with work and make sure I get all my essays sorted for Uni.

I hope we get a White Christmas this year, although probably not, from what the Daily Mail was telling me (because obviously the Daily Mail is the best newspaper for good news). Anyway it was all a bit of fun this article, but it did make me sad because it was saying that there is a very low (and I mean almost non-existant) chance that there will be snow, not even a little frost in the morning 😦

All I dream about is having a White Christmas.

But that’s by the by.

Title: How the Grinch Stole Christmas 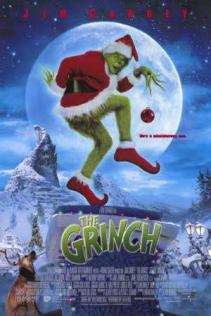 About: Discover the magic of the Mean One this holiday season! Oscar-winning director Ron Howard and Oscar-winning producer Brian Grazer bring Christmas’ best-loved grump to life with the help of the irrepressible Jim Carrey as The Grinch. The Grinch is a celebration of the holiday spirit no home should be without! Why is The Grinch (Carrey) such a grouch? No one seems to know, until little Cindy Lou Who (Taylor Momsen) takes matters into her own hands and turns both Whoville and The Grinch’s world upside down, inside out…and funny side up in her search for the true meaning of Christmas.

Review: What I liked about this film, is that it has an honest message about it. Once you get past the Grinch being (well for lack of a better word) a Grinch, you realise by the end that the film is trying to show how important the people around you are.

It would be great to think in real life that the solutions in life could be solved by a l
ittle girl, but that’s stretching it just a little bit too far.

The setting, Whoville, manages to bring that bit more of magic to the film. It is, as expected, an entirely Christmassy setting (except for the Grinch’s home).

The humour in this film couldn’t be more spot on. Jim Carrey seems to really lead the plot, and I do think that without his use of comedy the film might have flopped. Altho
ugh I did rather enjoy the narrator –  one example including the bit at the beginning where the narrator explains why the Grinch didn’t like Christmas –> Narrator: ‘Every Who down in Whoville liked Christmas a lot, but the Grinch, who lived just north of Whoville – did not. The Grinch hated Christmas – the whole Christmas season. Now, please don’t ask why; no one quite knows the reason. It could be, perhaps, that his shoes were too tight’.

I mean it’s not laugh out loud comedy, but I liked the ending where he was like perhaps his shoes were too tight. It is more of a subtle humour, but this is something that the narrator does throughout any of his speaking roles and it certainly is able to bring a smile to your face.

Jim Carrey really does shine as the Grinch and I feel a lot of people would not like this film if it weren’t for him, I, on the other hand, did find this film rather amusing and likeable. It’s not my favourite Christmas film, but that is not to say that I won’t watch it.

Anyone, young or old would like this film anyway. It’s perfect for family with young(ish) children and I think anyone would be mad to say that they didn’t enjoy it – at least a little bit.