We are almost at a week till Christmas (I mean 8 days is basically a week right?)

I hope you all have everything under control unlike me who still has to get a couple more Christmas presents for some people, but there’s nothing I like more than finding the perfect present so, unless I don’t find one in the next couple of days, I feel fine about that. 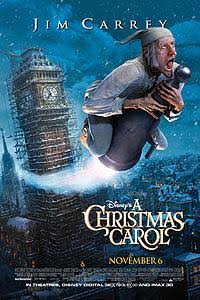 About: Though London awaits the joyful arrival of Christmas, miserly Ebenezer Scrooge (Jim Carrey) thinks it’s all humbug, berating his faithful clerk and cheerful nephew for their view. Later, Scrooge encounters the ghost of his late business partner, who warns that three spiits will visit him this night. The ghosts take Scrooge on a journey through his past, present and future in the hope of transforming his bitterness.

Review: We have another Jim Carrey film – what is it with him and Christmas films? Clearly he is a big fan of Christmas, although he always seems to play someone who hates Christmas at the start of the film.

The story that Dickens wrote in 1838 remains timeless, and at the same time, once you let ghosts into a movie, there’s room for anything. Because, yes there are ghosts in the film, but that really shouldn’t come as a surprise to you

What I do love about this film, is how effortless it looked to make, and yet at the same time I just know that there was a lot of attention to the detail of the film and I really do enjoy watching this film. Mainly because I love watching Christmas films that have the main character at the beginning hating Christmas and then by the end realise that Christmas is actually the best time of the year.

Although, admittedly I find it hard to believe how anyone could hate Christmas because it’s just such a magical time of the year.

I kind of liked this film even more because it was an animation film – it just gives the film so much more freedom to do stuff. Such as the design of the roo
ms, for example, Scrooge’s living room is as tall and as narrow as his mind (you know, not a very nice setting), whereas the contrast between him and his newphew, who’s living room is as big and as cheery as he is, really shows the differences between the characters.

You may say it’s weird to talk about the rooms, ut they really do have some meaning which I’m sure was intentional (unlike when you’re trying to analyse some poetry, for example, and you’re just there going like, yeah but did the poet really mean for that? I’m just thinking back to my days at school now, I am definitely happy that I have moved on from that).

Anyway, I just love this film, and I’m sure any fan of Christmas will love it too.