The only problem I have with Christmas getting closer (*exciting times*), is that my end of term essays are getting that much closer. I don’t know whether I should be happy that most of them (except one) are due in January, but it is also quite upsetting that I’m expected to work over the Christmas break (why do I have to be viewed as an adult).

Things were so much simpler as a child, which is why this next film that I’ve picked out is perfect. . . 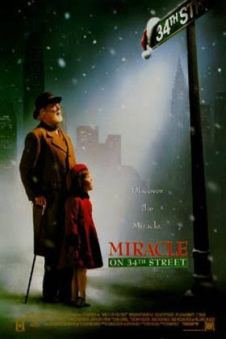 About: The 1947 holiday classic Miracle on 34th Street is transplanted to the 1990s with few changes in this family-oriented remake. The screenplay by the prolific John Hughes sticks close to the original outline, centering on Macy’s executive Dorey Walker (Elizabeth Perkins) and her young daughter Susan (Mara Wilson), neither of whom much believes in the spirit of Christmas. Dorey is in charge of hiring Macy’s Santas, including an old man named Kriss Kringle (Richard Attenborough). He does a remarkably convincing job, and he soon reveals that he actually believes himself to be Santa Claus. The authorities threaten to place the old man in an insane asylum, but a young lawyer comes to his defense. Meanwhile, Dorey and Susan find their own defenses melting and become reacquainted with the power of faith. Hughes and director Les Mayfield add a few modern touches, making Susan slightly more cynical and adding the requisite soulless corporate villains. Viewers familiar with the original may still prefer Edmund Gwenn’s original Kris Kringle and consider the remake unnecessary, although the newer version reflects enough of the earlier film’s spirit to prove entertaining to modern family audiences.

Review: So this is obviously not the original.

But I still feel that this film is still worth a watch.

Mara Wilson, does an amazing job of being that overly cute child, that you can’t help but adore. Is having young, adorable children a must to make a Christmas film that more special? I don’t know, but certainly it makes the film more magical because children are naturally more excited by Christmas than adults.

It’s a charming, feel good film, that can make anyone believe in the magic of Christmas and that Kriss Kringle is indeed, Santa.

And you have to admit that Richard Attenbourgh is faultless in his portrayal of Santa.

If you’re after a pleasant afternoon off, to enjoy a fairly chilled out film then this one is perfect for you.

It brings in the spirit of Christmas perfectly, you’ll be feeling like a small child again in no time.

And you’ll have to love the defense scene near the end, for whether or not Kriss Kringle is actually Santa Clause or not. The fact that the witnesses for him ends up being children (and the fact that that is enough to sway the judge is just amusing).

The film of course ends in a happy ending – but it’ll still have you on your toes, for it does feel at times whether or not the judge will say that Kriss Kringle is Santa.

Get ready for a cosy night in, if this is the film you put on tonight.