History: The History of the Sudbury Estate. The manor of Sudbury is listed in Domesday book (1086).

Sudbury became the property of the Vernon family in the early 16th century through the marriage of the heiress, Ellen Montgomery, to Sir John Vernon (d. 1545) a younger son of Sir Henry Vernon of Haddon Hall in north Derbyshire

Review:  I actually love coming to this place, I’ve been a few times and I still find it incredibly fascinating.

For people with a family, this is the perfect place because you have the Museum of Childhood there as well. However, for me and Luke we did it once and we’re not too fussed about that part.

But the house (and the grounds) are absolutely great! There’s not much to it, but it certainly is something that you go and enjoy! 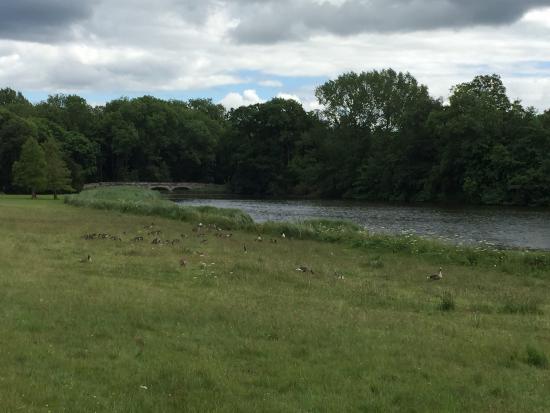 This photo of Sudbury Hall is courtesy of Tripadvisor

I’m so annoyed because I didn’t get my own photo of the water, so this photo is from Tripadvisor, however, you can still see what the grounds are like.

If you look closely at the photo you can see a bridge in the background. However, it’s not a bridge. Luke and I didn’t know this though, so we went to go and explore it.

There’s a little nook right by the edge of it and there’s a bench that you can sit on. Since the sun had decided to come out when we were there we decided to sit and enjoy the sunshine.

In the space of about fifteen minutes, several people came to the same location and were surprised that the bridge was actually a fake, it’s more of a wall to show a boundary. No one seemed to know this until they actually walked to it.

So at least it wasn’t just me and Luke being stupid.

Anyway, once the sun had decided to go back behind the clouds, we decided to venture into the house.

When you first go in you have to hand in a token (you get given two tokens, one for the house and one for the museum), so it’s very important that you take your time when you wander around the house. Although, I’m sure if you wanted to go around it again, all you would have to do is ask.

Now the first time we visited, we didn’t really ask any questions, or listen to the guides around the room. We walked around aimlessly and didn’t take in all the history. This was a mistake.

A mistake I learned the second time we visited, where we learnt everything that we could.

We didn’t intentionally go in and ask questions the second time either, but we pretty much got our own personal guided tour thanks to a man called Philip (I think, I can’t quite remember). Anyway, he was absolutely fantastic.

We met him in the first room of the house that we went into, and without us even asking he began to tell us the story of Sudbury.

Now I loved this, and so did Luke.

He told us the history of the fireplace, the vases and how they came to be in the house. Plus a whole lot more.

He came with us into the next room (which is stunning by the way) and talked to us about the grand staircase and how it came to be.

This staircase is absolutely stunning!

Now you can’t walk up the stairs unfortunately, but I can understand why not. It’s so important to be able to preserve things like this.

You’ll get to the top eventually, you just have to go up another flight of stairs as well.

The good thing about these sorts of houses, is that it is fairly easy to walk around them, because you just end up doing one big circle.

I just had to include a picture of the top of the staircase, I can’t believe how much detail has been put in to it, it’s so incredible.

We learnt that the cantilever staircase is regarded as possibly the finest of its date. It was designed by George Vernon and took (not surprisingly) months to be built.

The staircase really is something to marvel at: the final bill was £112 15s 5d, worth almost £9,500 in the twenty-first century – and obviously this would have been a lot more!

The ceiling paintings were completed by Louis Laguerre, who also completed a mural in the Great Hall.

Now I had two favourite rooms in this house, one was the Long Hall (which I’ll get to later) and the other was the Red Room below: 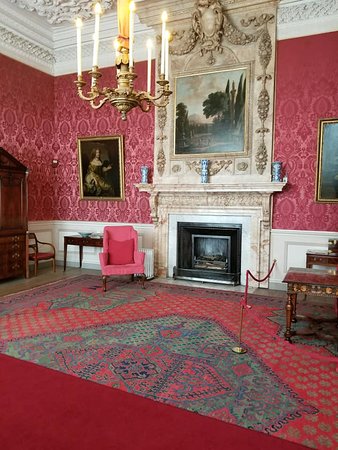 This photo of Sudbury Hall is courtesy of Tripadvisor

Okay so the picture above (of the red room), I didn’t actually get a picture of and I’m so annoyed about it, but here’s a picture from Tripadvisor.

Anyway, I loved this room. For two reasons.

The first is, if you look closer at the wallpaper, you might be able to see animals in the actual design. Now apparently this was done for entertainment, and that’s not something which happens now.

The second reason is that it was actually used in the BBC adaptation of Pride and Prejudice. This is the room where Colin Firth is stood by over the fireplace.

But that’s not all.

If you are think that you’ve recognised some of the other rooms of Sudbury Hall, then you might be surprised to learn that a significant amount of the interior was used as Pemberley as well.

If you are a fan of this show, then I can also tell you that the Library and the Saloon are shown to Elizabeth Bennet and her Aunt and Uncle Gardner by the housekeeper, also used in other parts where Darcy and his guests are being entertained by Georgiana playing on the piano.

They also make use of the Long Gallery in the show, and Darcy is seen walking down the Grand Staircase at one point. There is a lot that went into the filming of the show.

However, Sudbury was never used for the exterior of Pemberley, instead that honour was for Lyme Park (a great house and one that I will write about soon!).

Anyway, I loved when we came across the Long Gallery, me and Luke weren’t expecting it (and I love when we are surprised by things like this).

I love when houses have things like this, I don’t know why but it’s always so impressive.

There is so much to this place that I can’t wait to be able to go back when it’s all safe.

There’s another reason why I love this place though, and it’s not just about the house surprisingly.

It’s because nearby there’s a place to go for food that me and Luke LOVE going to called The Boar’s Head.

Now I actually use to go there all the time, because my grandparent’s use to make use of the caravan site there. But unfortunately, they no longer go there.

But me and Luke have made it a regular. We use to go pretty much every Sunday, but then I decided to go on the 1:1 Diet (you can read about my experience with it here), so we couldn’t exactly go out for food so often.

The last time we went there though was on the Valentine’s Day (well the day after because we were working). What I loved about that day though was the fact that Luke called up before and asked if they could serve our favourite pudding there (which is Ginger Sponge Cake with Custard – it’s so amazing).

They change up their pudding menus, but their main menu is normally always the same.

Anyway, my point was that if you are planning on going to Sudbury for a day trip with your family then you should make sure to also go to the Boar’s Head for food – it’ll be the perfect way to end your day out! Trust me 🙂