Hopping in your car and driving away on a road trip is one of the best ways to travel around the country. You might feel like you’ve seen it all, but think again. Across the continental United States, you can find all sorts of fun, different, and even outlandish attractions. 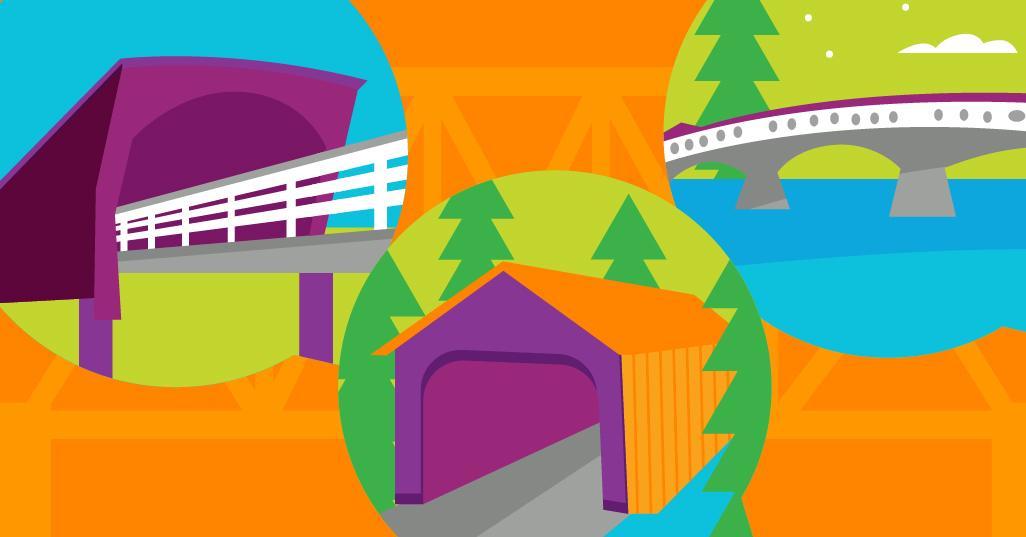 From a house made of paper in Massachusetts to an alligator petting zoo in Arkansas, we’ve rounded up a creative list of quirky roadside attractions from the east to west coast. Whether you stop by them on your way to another destination or make a trip just to see these strange sights, you’ll soon have a new story to share.

Since some attractions have seasonal hours, check to make sure your destination is open before you stop by. Take a look at the graphics below to learn more about some of the quirkiest roadside attractions America has to offer!

A Brief History of the Covered Bridge

Engineers designed covered bridges as a preservation measure. Adding sidewalls and a roof over a wooden bridge protected it from the elements and made it more likely to last longer. Without a cover, a wooden bridge would decay over time and eventually collapse.

Historians often cite a bridge built over the Schuylkill River in Philadelphia, PA, in 1805 as the first covered bridge in the U.S. According to research from the Federal Highway Administration, as many as 14,000 covered bridges dotted the nation at one time, but fewer than 900 remain today. Why? Timber fell out of favor as a bridge-building material in the mid-19th century as metals, such as cast iron and wrought iron, took over. Wooden bridges decreased in popularity and were built less frequently in the early 20th century.

Where You Can Find Covered Bridges

You can find covered bridges in many states — some may even be within easy driving distance from your home. Here are some notable ones to add to your travel list.

Tennessee has but just a few scenic covered bridges, two of which you’ll find in Sevier County. You may not recognize the name at first glance, but Sevier County is home to some of Tennessee’s most visited tourist attractions, including Great Smoky Mountains National Park and Dollywood amusement park in Pigeon Forge, as well as many vacation resorts in Gatlinburg.

The Harrisburg Covered Bridge, located east of Sevierville, is listed on the National Register of Historic Places. Built in 1875, it was originally used by locals to cross the East Fork of the Little Pigeon River. After a bypass around the area was built in the early 20th century and many people moved away, the bridge became less essential, eventually falling into disrepair in the 1970s. The Great Smokies Chapter and the Daughters of the American Revolution  raised the funds necessary to restore the bridge and ensure it remained a treasured landmark in Sevier County.

Emerts Cove Covered Bridge, located a few miles from Gatlinburg in the town of Pittman Center, offers a great viewpoint of the surrounding Great Smoky Mountains National Park. During a visit to Pittman Center, you can go fishing, hiking, swimming, golfing, and bird watching, and visit the historic City Hall. While this covered bridge isn’t historic — it was built in 2000 — Pittman Center dedicated it to Revolutionary War soldier Frederick Emert, whose family was among the area’s first settlers in the late 1700s. Emert is buried in the cemetery a half-mile from the bridge.

With 213 covered bridges, Pennsylvania boasts the most covered bridges in the U.S. Bucks County, located just north of Philadelphia and known for its charming towns and historic main streets, lays claim to 12 covered bridges that can be admired on a one-day self-guided driving tour.

At a length of 150 feet across Neshaminy Creek, Schofield Ford Bridge remains Bucks County’s longest covered bridge. It’s located within Tyler State Park in Newtown, where you can enjoy hiking, biking, or horseback riding on the park’s trails in their original farm and woodland setting. Though the original bridge first stood in 1874, engineers rebuilt it after a fire destroyed it in 1991.

Due to its feature in a 1992 novel, a 1995 film starring Meryl Streep and Clint Eastwood, and 2014 Broadway musical, this area (and its bridges) is pretty well known. Yep, we’re talking about The Bridges of Madison County. You can check out the county’s iconic covered bridges and other sites featured in the major motion picture in an 82-mile scenic

driving tour. Or take a half-day tour to see a few select highlights, including the Holliwell Covered Bridge and the Roseman Covered Bridge.

Built in 1880 and renovated in 1995, Holliwell is the longest covered bridge in the county, measuring 122 feet. The 107-foot Roseman Covered Bridge was built in 1883 and renovated in 1992. In addition to its prominent feature in the movie, Roseman’s other claim to fame is its reputation as a haunted bridge. Local lore says an escapee from the county jail disappeared at the bridge in 1892, never to be found again.

Have you been wondering about the West Coast? Oregon has got you covered (pun intended!). The Covered Bridge Society of Oregon lists 51 covered bridges in the state, making it the largest number of covered bridges west of the Mississippi River.

Lane County is known for waterfalls, hot springs, and wineries. But it is also home to 20 covered bridges, 16 of which made it onto the National Register of Historic Places. You’ll definitely want to take a day to visit these scenic spots.

The Chambers Covered Railroad Bridge in Cottage Grove is Oregon’s only covered railroad bridge. Built in 1925, the bridge stopped being used in 1951 when the railroad was sold for scrap. It was privately owned until 2006 when the City of Cottage Grove acquired the decaying bridge and restored this historic treasure. Other bridges of interest include the Office Covered Bridge, Oregon’s longest covered bridges at 180-feet long, and the Goodpasture Covered Bridge, one of the most photographed bridges in the state thanks to its unique architectural details.

With 148 bridges, the state of Ohio ranks second behind Pennsylvania for the most covered bridges in the nation. You can find nearly two dozen of them in Ashtabula County in the northeast corner of the state. Ashtabula, which calls itself Ohio’s covered bridge capital, takes great pride in their historic covered bridges, even hosting an annual festival in the fall.

Some of the earliest bridges in the county date back to the 1860s. Mechanicsville Road Covered Bridge over the Grand River is the longest single-span covered bridge in the county and is also believed to be the oldest. It was first built in 1867 and renovated in 2003.

This state is home to the longest wooden covered bridge in the U.S. called the Cornish-Windsor Bridge, which is aptly named as it spans 449 feet across two cities (one end in Cornish, NH, and the other end in Windsor, VT). Originally built in 1866 and listed on the National Register of Historic Places, it also holds the title of the oldest covered bridge in New Hampshire.

Visitors also frequent the Honeymoon Bridge built over the Ellis River in Jackson in 1876. Many newly married couples commemorate their special day with photos using this scenic bridge as a beautiful backdrop.

Other covered bridges can be found in Bath, Pittsburg, Albany, Henniker, Swanzey, and Winchester.

New Hampshire’s neighbor shares not only the historic Cornish-Windsor Bridge, but also the Mount Orne Covered Bridge, which crosses the Connecticut River between Lancaster, NH, and Lunenburg, VT.

The small state of Vermont boasts the highest density of covered bridges in the nation at just over 100. With so many bridges to see, you may want to pick a county or two and plan an easy driving tour to bridges within that area. 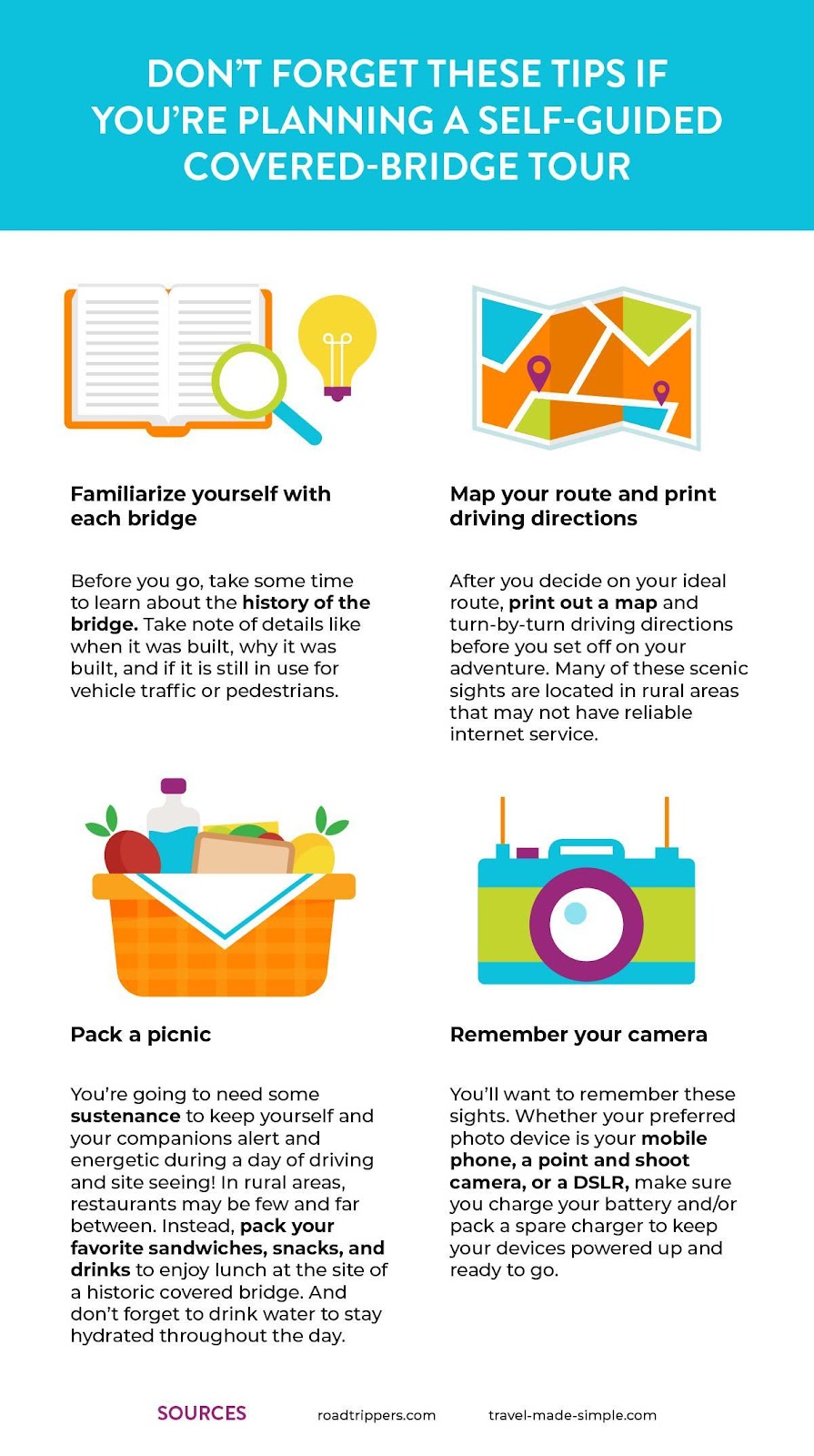 A self-guided driving tour of covered bridges will make you feel like you’ve been transported back in time. By visiting some of these historic landmarks, you can venture off the beaten path and experience a little bit of living history. Though the number of covered bridges across the country has dwindled, there’s still a great many to see and admire.