That’s right people, only TWO MORE WEEKS! How amazing is that.

I think this is reason enough for an extra bonus film (well in this case films. . . you’ll see what I mean in just a second).

I always use Christmas (or any holiday really) as an excuse for a film marathon, and because this is one of my favourites, I’m going to put some time aside so that I can watch Harry Potter.  If you’re a hater than just be quiet. I love Harry Potter and any excuse to watch it, is a good excuse (not that you need an excuse to watch it to be honest). But it’s like a tradition in my house now and you know, Harry Potter does have some scenes set around the Christmas time, so really now is a perfect time.

Anyway, alongside Harry Potter (looks like it’s going to be a long night haha), the next film in the Christmas countdown is. . . 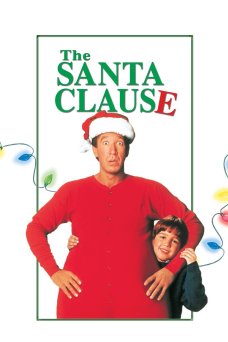 About: Divorced dad Scott (Tim Allen) has custody of his son (Eric Lloyd) on Christmas Eve. After he accidentally kills a man in a Santa suit, they are magically transported to the North Pole, where an elf explains that Scott must take Santa’s place before the next Christmas arrives. Scott thinks he’s dreaming, but over the next several months he gains weight and grows an inexplicably white beard. Maybe that night at the North Pole wasn’t a dream after all — and maybe Scott has a lot of work to do.

Review:  “Believing is seeing”, what a great quotation this film has. I certainly believe this to be true.

This is an instant Christmas classic – I mean any film that is based around Father Christmas kind of has to be really.

Tim Allen has a certain comedic appeal, and this film suits him perfectly for him. There are definitely some laugh out loud moments, with the film ultimately ending in a feel good sort of way.

What’s great about this film, is that children will really love it because it answers all those questions about how Santa successful gives the children presents at Christmas – any adults who watch this film may find some of those scenes amusing (whilst also secretly appreciating it).

I wouldn’t say that this is something new and unexpected, but it delivers the right amount of holiday cheer to make any day feel that much better.

I loved the play on words in this film as well – mainly the whole Santa Clause bit – which obviously makes everything make that much more sense.

The father and son relationship is cute by the end, also what a lucky kid he is, to have his father be the real Santa Clause.

My only real complaint is that by the end the mother just all of a sudden believes that he is Santa Clause – it just seemed a bit out of the blue. Although, I understand why it had to happen, I just didn’t really understand why it happened, maybe I should just watch the film again (seems like a perfect excuse in my mind really).

Anyway, true to the quotation used previously, “Seeing is believing” and I believe that in order for you to truly apprecaite this film, you have to see it.